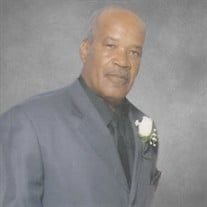 Mr. Johnny Clyde Thompson, Sr. was born June 8, 1946, in Brandon, MS to the late Ike and Mattie Thompson. He transitioned to his heavenly home on Saturday July 31, 2021, at the St. Dominic Hospital in Jackson, MS. Mr. Thompson was preceded in death by his parents Mr. Ike Thompson Sr. and Mrs. Mattie Thompson, as well as two brothers Mr. Joe Sidney Tucker, and Mr. Ike Thompson Jr. Mr. Thompson grew up in Fannin MS, where he attended and was a graduate of Carter High School in Brandon, MS. Mr. Thompson served in the US Army for several years and went on to be employed for Cataphote Manufactory for many years until the business closed their doors. Finally, Mr. Thompson went on to work for Jackson International Airport where he worked until his retirement. Mr. Thompson served faithfully at the Truelight MB Church until his health failed. During that time, he served on the Deacon Board, as the Sunday School Superintendent, as a Sunday School Teacher, as a member of the male choir and whatever capacity of ministry he was needed. He enjoyed church attendance, visiting the sick, fishing, playing baseball, eating, and exploring different restaurants, but most of all he loved the time spent with his family and friends. He especially enjoyed every opportunity he had to spend with his children and his grandchildren. Mr. Thompson leaves to cherish his memories one daughter Angelia (Pastor Lamont Adams) of Brandon, one son Johnny C. Thompson Jr. of Brandon, two grandchildren Britney Thompson of Brandon, and Jaterra Davis of Shreveport, LA. Three brothers Joseph Tucker (Mable), Jimmy Thompson (Beverly), and Willie James Thompson (Virginia), four sisters Madeline Lindsey (Tommy), Shirley Grant (Eddie), Barbara Grant, Bettie T. Hobbs (Alfred) and a host of nieces and nephews.

Mr. Johnny Clyde Thompson, Sr. was born June 8, 1946, in Brandon, MS to the late Ike and Mattie Thompson. He transitioned to his heavenly home on Saturday July 31, 2021, at the St. Dominic Hospital in Jackson, MS. Mr. Thompson was preceded in... View Obituary & Service Information

The family of Mr. Johnny Clyde Thompson Sr. created this Life Tributes page to make it easy to share your memories.

Send flowers to the Thompson family.