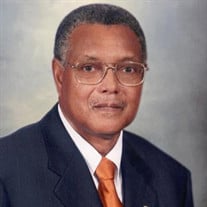 I have fought the good fight, I have finished my course, I have kept the faith: Henceforth, there is a crown of righteousness which the Lord, the righteous Judge will award me at that day: and not only to me but also to all who have longed for His appearing. II Timothy 4:7-8 A Time to Live Johnny Alvin Walker, born February 4, 1946, was the 1st born child of Y. Z. Walker and Sarah Elizabeth Thornton Walker of Newton, Mississippi. Johnny confessed Christ at an early age. He became a member of St. John Missionary Baptist Church, where he remained a faithful member until he left to attend college. He later became a member and deacon of King Solomon in Natchez, Mississippi. While in Hattiesburg, he was a faithful member and deacon of True Light Missionary Baptist Church. Later he moved to Brandon, Mississippi. There he became a member and deacon at Mt. Elam Missionary Baptist Church. Johnny was a graduate of Pilate High School in Newton, Mississippi; Harris Junior College of Meridian, Mississippi; and Alcorn State University of Lorman, Mississippi. Johnny was a dedicated educator in the Natchez-Adam Public School System (23 Years), Richton Public School System (2 years), Hattiesburg Public Schools (4 years), and the Clinton Public Schools (5 years). He retired in 2001 with over 34 years of service to education. After retiring, Johnny developed his own painting and housing business as a hobby. This business provided him an opportunity to fulfill a life’s mission: to be the change you wish to see in the world and a blessing to those who entrust you with providing a service. He did this with a spirit of excellence throughout the state of Mississippi. Johnny was a member of Epsilon Kappa Kappa Chapter of Omega Psi Phi Fraternity of Canton, Mississippi, as well as a life member of Omega Psi Phi Fraternity. He was a member of Alcorn State University Metro Jackson Alcorn Alumni Association and the Alcorn National Alumni Association Agriculture Committee. He was also a lifetime member of the NAACP. He had a gift of mentoring young people. Everywhere he resided he found a young man to mentor and support educationally. He developed and funded his own Walker’s Scholarship Foundation. Every high school and college graduate that completed their course work/degree at Mt. Elam was blessed through the Walker’s Scholarship Foundation. Johnny loved his church and worked diligently to improve the looks of the church inside and outside. He also worked diligently with the Mt. Elam Food Program in partnership with The Mississippi Food Network Program to provide the community with a Food Pantry. A talented man, Johnny was very professional, firm, reserved and most of all, a stickler for things to be “just right.” A Time to Love Johnny Walker met, locked his sites on, wooed, and captured his most cherished prize—his Proverbs 31 wife, Catherine Jones Walker. With “Cat,” as he so fondly called her, he found comfort in being himself, a Godly man and a true gentleman. They were happily married for more than 51 years. He was a very devoted husband. He was also a loving father, grandfather and Godfather. A Time to Die Deacon Walker departed this life on November 14, 2020 at St. Dominic Hospital, in Jackson, Mississippi. He is preceded in death by his mother and father, Y. Z. and Sarah Elizabeth Walker; sister,Sarah Francis Brown; and son, Christopher L. Walker. A Time to Cherish He leaves to cherish his memories his wife, Catherine Walker; his daughter, Canteena Walker Davis; son-in-law, Sedrick Davis; daughter-in-law, Laranda M. Walker; two (2)sisters, Emma Ree Croom and Mary Ann Walker (Charlie); two (2)brothers, Ronnie Walker and Jack Walker; three(3) aunts, Esther Conkerite, Lola Thornton, and Katie Thornton; grandchildren, Kayla and Jeremiah Davis, John Luke and Lincoln Hartfield Walker; step grandchild, Shuntaria Davis; step great-grandchildren, Trenton and Nina; Godchildren: Valerie Burnett, Cortez Moore, Rena Davis Hogan, Peggy Drake, Gloria Armstrong; and a host of nieces, nephews, other relatives and friends.

I have fought the good fight, I have finished my course, I have kept the faith: Henceforth, there is a crown of righteousness which the Lord, the righteous Judge will award me at that day: and not only to me but also to all who have longed for... View Obituary & Service Information

The family of Mr Johnny Alvin Walker created this Life Tributes page to make it easy to share your memories.

I have fought the good fight, I have finished my course, I have...

Send flowers to the Walker family.