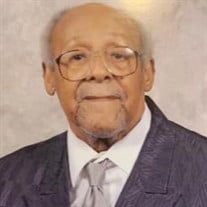 God saw the road was getting rough, the hills hard to climb, He gently closed his eyes and whispered, "Peace be Thine" Joseph Jones was born May 25, 1927 in Raleigh. Mississippi to the late Willie Nelson and Mallie Page Jones He was active and his minor was very sharp until his health began to fail. He was transitioned to eternal life on Wednesday, January 20, 2021 at Merit Health on Lakeland Drive. Joseph was preceded in death by seven siblings: Nathan Jones, Willie Nelson Jones, Casee Jones, Henry D Jones, Sarah tee Norwood, Minnie Mae Mcintyre and Annie Mae McCoy. Joseph accepted Christ at an early age. He joined Warren Hill Missionary Baptist Church in Raleigh, Mississippi He attended church regularly and enjoyed singing in the choir. Today he is rocking and signing in that Heavenly choir. He was moved to Fannin from Raleigh by his brother-in-law. Lieutenant Johnson. At the age of seventeen he married Josie Clay, and years later two children were born. On December 15, 1945, he enlisted into the United States Navy. He faithfully served his country until November 6, 1947, where he received an Honorable Discharge as a Seaman First Class While in the Navy he was awarded the World War il Victory Medal. After returning home from the United States Navy, he worked on the railroad for a number of years. He also worked for 25 years at Knox Glass Plant, later the name was changed to Glass Containers He retired from the glass plant and began to live a peaceful life However, he always had work on his mind and began working for the City of Flowood. His motto was a man should work hard to support himself and his family to his leisure, he enjoved watching television mainly CNN, watching the squirrels play in the backyard, talking to family members and friends, He joined the Fannin Baptist Church and was a very devoted deacon and member He loved Gad, fils pastor, and church family. He always tried to be apart of the church service by singing his favorite hymn Love the Lord He Heard My Cry. Joseph leaves to cherish the memories of being the oldest deacon at Fannin Baptist Church. He was 93 bears strong He was a giant but yet a very humble man. He would go the last mile for his family. Joseph leaves to cherish his memory, one daughter: Brenda Jones of Brandon, MS and one son: Robert Joseph Jones of Dallas, Texas. He was also a father to two of his grand children, Kevin M. Jones and Kimberly M. Jones-lohnson of Dailus. Texas Brenda has one daughter: Tanishia of Dellas, TX and one son Devin Smith of Brandon, MS. Robert's children are Lasonia Christon, Christine Christon, Oriando Fairley. Kimberlin Jones, Jasmine Moore, Katie Taylor, Robert Jones Jr., Christopher Jones, Memarie Jones, Joseph and Mariah Jones Joseph leaves to cherish his memory four (4) sisters: Mary 8. Taylor of Brandon Mississippi Willie Jean Brown of Dallas, Texas, Anna Carroll of Camden, Mississippi and Mary L Adams of Philadelphia, PAtwo (2) brothers. Willie Earl Jones of Brandon, Mississippi, and Jesse Jones of Philadelphia, PA: 15 great grandchildren, and a host of nieces, nephews, cousins and loving friends.

God saw the road was getting rough, the hills hard to climb, He gently closed his eyes and whispered, "Peace be Thine" Joseph Jones was born May 25, 1927 in Raleigh. Mississippi to the late Willie Nelson and Mallie Page Jones He was active... View Obituary & Service Information

The family of Mr. Joseph Jones created this Life Tributes page to make it easy to share your memories.

God saw the road was getting rough, the hills hard to climb,...