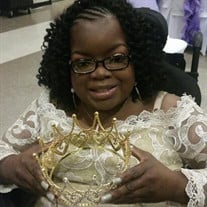 I have fought the good fight, I have finished the race, I have kept the faith. 8 Henceforth there is laid up for me the crown of righteousness, which the Lord, the righteous judge, will award to me on that day, and not only to me but also to all who have loved his appearing. 2 Timothy 4:7-8 Katrena Jo Bryant was born in Flowood, MS on Friday, February 3, 1978, to Pastor Clarence and First Lady Neva Bryant, Sr. and was one of five (5) children. She was preceded in death by her grandparents: Mr. and Mrs. James and Lula V. Bryant, Sr. and Mr. and Mrs. Aaron and Alona Myers, Sr., along with a special brother-cousin: Enoch Bryant, Jr. Educationally, Katrena attended Brandon elementary, middle and high schools and though she did not care much for animals, Katrena took pride in being a Brandon Bulldog. She boasted of her love as a very proud member of the Class of 1997. Although she bled BLACK and RED in admiration of Brandon High School, her most favorite colors were grey and PURPLE, which is the color of royalty. Katrena's favorite holidays were Thanksgiving and Christmas because this provided an opportunity to enjoy good food and visit with family and friends. She was the epitome of courage and strength! Unfortunately, Katrena was born with a medical condition called Spinal Bifida, which limited her walking ability. Still, her family made a conscious effort to ensure she did not allow her disability to prevent her from doing things she desired. For several years, she worked at Region-8 Mental Health Services and absolutely loved her job, peers and staff. Not only did Katrena, who was presented a "Key to the City" by Mayor Gary Rhodes of Flowood in 2018, create her own encouragement ministry to others on Facebook, but she was also an avid New Orleans Saints fan and loved hand-making jewelry to gift to others. Katrena received Christ at an early age and was a member of St. Mary Missionary Baptist Church in Flowood, where she sang in the choir. In addition, she faithfully supported her father as pastor of Pine Valley Missionary Baptist Church in Brandon where she served as an usher. As her health began to fail and attending church in person became limited, Katrena's relationship with Jesus Christ never altered. From reading her Bible to listening to various church services through the enhancement of technology, Katrena remained a devoted believer until she received her heavenly crown on Saturday, January 1, 2022, after being surrounded by those whom she loved, her family. Leaving to cherish her memories are: parents, Pastor Clarence and Neva Bryant, Sr.; two (2) brothers: Rev. Clarence (Tracie) Bryant, Jr. and Derrick (Althea) McNeal; three (3) sisters: Sandra (Dennis) Kelly, Terri D. Williams and LaKeisha (Jesse) Hall; eight (8) nephews: Jaiden Bryant, Allen Kelly, Caleb Williams, Tyrell Jackson, Camron McNeal, Deshon McNeal, Shamar McNeal and Nazier McNeal; four (4) nieces: Cameryn Williams, Allisyn Kelly, Krystal Bonaparte and Tynisa McNeal; four (4) sister-cousins: Theresa Myers Sanders, Kendra Bryant, Angela Bryant Cooper and Jennifer Bryant Haywood; three (3) brother-cousins: Terry "Roynell" Myers, Timothy Myers and Pastor Joshua Myers; a host of other cousins, aunts, uncles and friends. Katrena is a true testament of the song: "Whatever It Takes, I'm All In"

I have fought the good fight, I have finished the race, I have kept the faith. 8 Henceforth there is laid up for me the crown of righteousness, which the Lord, the righteous judge, will award to me on that day, and not only to me but also to... View Obituary & Service Information

The family of Ms Katrena Jo Bryant created this Life Tributes page to make it easy to share your memories.

I have fought the good fight, I have finished the race, I have...

Send flowers to the Bryant family.