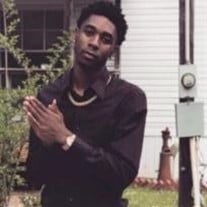 Kevin A Taylor Jr., was born April 15th, 1999 in Jackson, MS to Irma D Ward and Kevin A Taylor Sr. He was raised in the Shady Lane Community in Brandon, MS and was known throughout the community as “Dank.” The nickname was given to him by his loving grandmother Polly T Ward whom has proceeded him in death. Dank, attended grades K-12 in the Brandon School District. During his high school years, he had a love for the game of basketball and that gained him notoriety throughout Rankin County as the tall lanky kid with the quirky smile That could light up a room. His athletic sportsmanship drew family and friends together night after night to cheer him on. After high school, Dank went on to work various jobs before deciding to pursue his career as an entrepreneur, creating and branding his own clothing line. Dank was full of life and he loved spending time with his entire family, taking trips with the love of his life (Chelsea), and was adamant about being his own boss. He leaves behind to mourn his loving wife & son Chelsea and Champion Taylor and two stepdaughters Corinthian and Cambridge Clark, his mother Irma D. Ward and father Kevin A. Taylor, Sr (Cassandra Jones Taylor). His siblings David Ward, Audreyana B. Hobson, Dajiah Taylor, Keino Stowers, Kambri Taylor, Kaydence Taylor, Twyla Douglas, Keelin Taylor, Kassadi Taylor. His maternal grandparents David and Polly Ward (deceased). His Paternal grandparents Eddie (Gloria) Taylor. He was also proceeded in death by two lovely aunts Janelle Taylor and Jennifer Ward.Dank was taken away from us far too soon. No Words cannot express our deep-felt sorrow. We will never get the chance to see him grow into the man he was destined to be. In his 22 years imbedded with us, Kevin brought joy to our hearts with his goofy antics and comical smile. Dank was able to visit places and see things that many can only hope for. His passing has left us broken but we will demand justice in your name. May your name reign on in our memories for years to come. 2 Timothy 4:7 “ I have fought the good fight , I have finished the race, and I have remained faithful”

Kevin A Taylor Jr., was born April 15th, 1999 in Jackson, MS to Irma D Ward and Kevin A Taylor Sr. He was raised in the Shady Lane Community in Brandon, MS and was known throughout the community as &#8220;Dank.&#8221; The nickname was given... View Obituary & Service Information

The family of Mr. Kevin Alexander Taylor Jr. created this Life Tributes page to make it easy to share your memories.