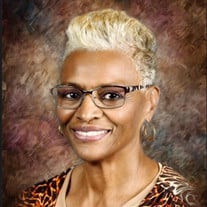 LELA MAE GARNER was born November 11, 1944 in Rankin County Mississippi to the late George and Lula Garner. As the seventh of nine children, Lela was blessed to grow up in a Christian home where she was taught the way to love and have compassion for others. As a child, Lela attended New Howell Elementary and Carter High School. She went on to receive her Bachelor of Arts degree in Elementary Education from Tougaloo College and her Master's degree in Deaf Education from Jackson State University. She furthered her studies at Western Michigan University. Lela began her career as a Postal Clerk in the United States Postal Service, but later shifted to education as the Assistant Area Coordinator for Rankin Independent Schools. She continued her educational career as a teacher in the Meridian Public School District, Rosa Scott School, Niles Community School, and the Mississippi School for the Deaf. Lela was also a lifelong entrepreneur and co-owner of GG's Christian Academy where she impacted the lives of countless students throughout the years. Lela was a faithful member of Jackson Revival Center Church under the leadership of the late Raymond O. Biard. She continued her fervent support of the ministry as his daughter, Jennifer R. Biard, transitioned to the role of senior pastor. Lela was known to be a giver of her time, talent, and treasure and offered decades of service to accomplish the work of the ministry in seeing lives changed and souls brought to Christ. Lela was preceded in death by her parents, George and Lula Garner; and siblings, John Henry Garner, George Garner, Thomas Garner, and Everlena Grandy. She leaves behind the legacy of her loving children: Morrice (Jennifer) Taylor and Markeeth (Veronica) Taylor; and her grandchildren: Olivia, Jason, Victoria, KJ, Ally, and one soon to come bundle of joy. She also leaves to cherish her memory one brother, David (Amanda) Garner; three sisters, Rosie Proctor, Lula (Dan) Williams, and Ada (General) Clark; one sister-in-law, Tessie Garner; and a host of nieces, nephews, family, church family, and friends.

LELA MAE GARNER was born November 11, 1944 in Rankin County Mississippi to the late George and Lula Garner. As the seventh of nine children, Lela was blessed to grow up in a Christian home where she was taught the way to love and have compassion... View Obituary & Service Information

The family of Ms. Lela Garner Taylor created this Life Tributes page to make it easy to share your memories.