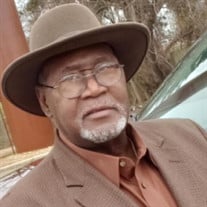 Mr. Lenton "Hutt” Johnson was born on June 10, 1947 to Bennie Coleman and Sara Melvin, whom both preceded him in death along with his four (4) brothers; Sidney "Buck” Johnson, Arthur “Coon" Johnson, Willie James "Smiley" Johnson, Albert "Al Boo” Melvin Jr., and James "Lelp” Howard. Lenton's sunset was at the Sonny Montgomery Veteran's Memorial Hospital on August 28, 2020. Lenton grew up in the Sandhill Community in Brandon, Mississippi where he was a graduate of Carter High School in Brandon, Mississippi. It was from there, he went on to obtain a Social Arts Degree at Coahoma Jr. College and a Bachelor of Science Degree from Jackson State College. He joined Sand Hill Missionary Baptist Church in Brandon, Mississippi and was a faithful member while serving there. WHA Lenton was employed by was employed by the United Gas Pipeline Company. Lenton met and married the lovely, Vida Carson on October 1, 1969. To this union, 3 children were born. Lenton served in the Army National Guard in the 113th MP Company for 16 years until his retirement. He enjoyed fishing and spending time with his beloved family. To all who knew him, was to love him. He had the "gift of gab", always had a smile on his face, a story for every experience that one could imagine and an infectious and hearty laugh. He was affectionately known as "Mr. Sandhill”. He leaves to cherish his memories, his three (3) sons; Byron (Shayne) Johnson, Lenton Dewayne (Iliana Reyes) Johnson, and Brian Antwan Johnson, four sisters; Sara Ann (Samuel) Davis, Earnestine (Arlon) Gray, Elouise Melvin, and Lucille Stapleton, one (1) brother, John Alfred “Bunk” (Katie) Melvin six (6) grandchildren; Jasmine Johnson-Vides, Jacob Johnson, Brandi Tucker, Malia Tucker, Lenton Jordan Johnson, and Amaya Celia Johnson, five (5) great grandchildren; Lucy Loa, Luis Loa, Leo Vides, Kaelina Johnson, Ashyer Johnson and a host of nieces, nephews, cousins and friends.

The family of Mr. Lenton Johnson created this Life Tributes page to make it easy to share your memories.