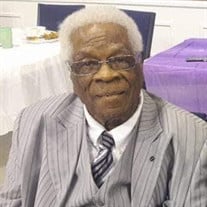 Mr. Leroy Macklin, Sr. (Roy) was born on April 17, 1930 to Jack and Celia Bilbro Macklin, whom both preceded him in death along with his five (5) sisters and ten (10) brothers; Ernest (Ethel), Kirby (Annie Bell), Lovey (Reverend Cleveland Floyd), J.C. (Inez), Alf (Martha)), Lucille (Tennie) Pernell, Dave (Zula), Willie Mae (Hubbard) Taylor, Earl (Luvenia), James (Annie Pearl), Braddie Lee (Early) Grant, O.B. (Doretha), Arlestera (Emma), Louise Cleveland (Maxine) and Betteye Jean (Reverend Grady) Soloman. Leroy's sunset was at home with loved ones on April 23, 2020. Leroy grew up in Pelahatchie/Leesburg, Mississippi where he attended Leesburg Elementary and later Betty Mae Jack Middle School in Morton, Mississippi. He joined Oak Grove Missionary Baptist Church in Leesburg, Mississippi and was a faithful member while serving there. At an early age, he was employed by the Town of Pelahatchie until he met his lovely companion, Gladys Burton who he married and they relocated to Jackson, Mississippi. He became gainfully employed at Scanlon Taylor Milwork Company of Jackson, Mississippi until he and Gladys moved to Chicago, Illinois. However, the couple had to return to Mississippi after Gladys' father became ill and they were tasked to provide care for him. Leroy returned to Scanlon Taylor Milwork to work and remained there until he retired. After retirement, he began a flourishing landscaping business. He taught his youngest son Randy the craft and today he walks in the footsteps that his father paved. He enjoyed fishing, hunting, traveling and singing. Leroy was a member of hunting camps in Rankin and Madison counties. Leroy remained faithful in ministry and became a member of the Pilgrim Rest Missionary Baptist Church in Brandon, Mississippi. There he served untiringly on the deacon board and was a member of the male chorus. His passion for gospel music led him to become one of the original members of the Spiritual Clouds of Joy and the B & S Gospel Singers. He leaves to cherish his memories, his wife, Gladys Burton Macklin; three (3) daughters, Dianne (Ronald) Stancle, Shirley (Abe) Wallace, and Glenda (Chris) Deans; two sons, Leroy (Shonna) Macklin and John Randy (Georgette) Macklin, twenty (20) grandchildren, forty-one (41) great-grandchildren, two (2) brothers-in-law; Isaiah Washington and Elbert Watts and a host of nieces, nephews, cousins and friends.

The family of Mr. Leroy Macklin created this Life Tributes page to make it easy to share your memories.

Send flowers to the Macklin family.