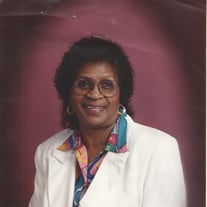 On Thursday, September 12, 2019 Lillie Rose fulfilled the schedule God planned for her. God whispered, “Well done my child” and He called her home. Lillie Rose Johnson Hines was born July 24, 1927 to Earl Lee and Robert Johnson. She was the oldest of eight children. Her two brothers, Robert Lee and Ray preceded her in death. She met and married Willie Hines. She was the mother of two children, Diane Hines and Willie Otha Hines (deceased). At an early age, she accepted Christ as her Lord and Savior and joined Jerusalem Missionary Baptist Church. She moved to Milwaukee, Wisconsin where she lived and worked until retirement. She worked for the county while living in Milwaukee. She was a member of St. Phillips Lutheran Church. After retiring, she moved back home to Mississippi and rejoined the Jerusalem Church Family where she faithfully attended Sunday School, Bible Study and prayer meetings. She was a member of the church hospitality committee until her health failed. She leaves to celebrate her life and cherish her sweet memories: - one daughter, Diane Hines; five sisters, Lillie Ruth Lucas, Ruby Dell Perkins, Barbara Karasiewicz (John), Janet Smith and Mae Etta Lampley (Gregory); one brother, Lawrence Wilson (Mae Catherine); all of Braxton, MS., one sister-in-law, Mary Johnson (Robert Lee - deceased) Morton, MS, seven nieces, six nephews and a host of family and friends

The family of Mrs Lillie Rose Hines created this Life Tributes page to make it easy to share your memories.

Send flowers to the Hines family.