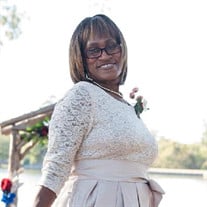 Linda Faye King was born on May 11, 1959 to the late Mr. Ras Norwood Jr. and Mrs. Mary Lee Norwood in Brandon, Mississippi. She graduated from Carter High School, Class of 1977, and went on to attend Phillips Junior College. Linda was the fifth... View Obituary & Service Information

The family of Ms. Linda F. King created this Life Tributes page to make it easy to share your memories.

Send flowers to the King family.