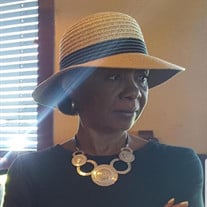 Linda Diana Lindsey was born in Jackson, Mississippi on June 14, 1954 to Jessie Russell, Jr. and Ethel Russell. She was the eldest of five children. She was affectionately known to her family as Di and Diane. She fought a good fight and finished her race on December 14, 2020. She is now at rest with her lord and savior, Jesus Christ. She was married to Habakkuk Jones and to this union one child was born and she was also married to Thad Lindsey Jr, and to this union two children were born. Linda was a proud product of Jim Hill High School. She attended Belhaven University and she received her Bachelors of Administration degree in 2001. Linda and her family joined Mt Elam MB Church where she was a dedicated servant of Christ and a dedicated member. She was an usher and announcement clerk, Linda love bible study and her favorite phrase was, "Trust in the Lord". She dearly love Mt Elam MB Church and loved talking about Pastor McBounds and First Lady Tish. Linda was a committed and dedicated employee of the City of Jackson for over 35 years. Linda started her career at the Water department as a clerk and worked her way up to an assistant manager. She also worked at Joanns's and Polly's Fabrics where she became widely known throughout the city and surrounding areas for her skills as a seamstress. She also worked at the Career Development Canter teaching sewing classes. She brought so many knowledge to her students that allowed them to soar. After retiring, she was able to immerse herself in a number of pleasures that brought joy to her life. She enjoyed landscaping, gardening, traveling, reading, writing notes of encouragement and spending time with family and friends. She truly enjoyed cooking, especially baking and passed her skills on to her children and grandchildren. She was a prolific writer, who wrote to President Barack Obama and First Lady Michelle Obama and received a two page response. She was overjoyed and honored to have received their letter. Linda leaves to continue her legacy: daughters, Sonya Buckner, Natalie Lindsey and Erica Lindsey; five grandchildren whom she adored and counted as on of God's greatest gifts to her- Sasha Buckner, Kamron Brown, Omari Lindsey, Noah James and Daniel Williams II, and one great grandchild Allen Brown, II; sister Beverly Russell; brothers Larry Russell (Christine), Daryl Russell (Alberta) and Dexter Russell (Tonya); and a host of other relatives and friends. She will be deeply missed by all who were blessed to know her. Dear and special friends: JoAnn Sanders Moore, Sharon Beamon, Charlotte Burns, Robert Martin, Craig Ellis, Debra Barr, Sam Ashmore, Ronnie Thompson, Marq Jones, Ke'Arrya McGloster and Decon Eddie Wilson.

Linda Diana Lindsey was born in Jackson, Mississippi on June 14, 1954 to Jessie Russell, Jr. and Ethel Russell. She was the eldest of five children. She was affectionately known to her family as Di and Diane. She fought a good fight and finished... View Obituary & Service Information

The family of Ms. Linda Diana Lindsey created this Life Tributes page to make it easy to share your memories.

Linda Diana Lindsey was born in Jackson, Mississippi on June...

Send flowers to the Lindsey family.