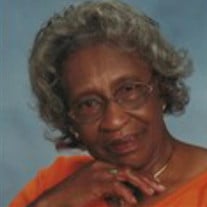 Psalm 27:1 "The Lord is my light and my salvation; Whom shall I fear? The Lord is the strength of my life; Of Whom shall I be afraid?" Lorene Taylor Mack transitioned into God's arms on Wednesday October 13, 2021, at the age of eighty-two. Lorene was born December 19, 1938, in Florence Mississippi to Tom and Mandy Alexander Love. Lorene was one of two children, her sister Tommie Jean Williams preceded her in death in 2006. She was a member of Greater Enoch Grove Missionary Baptist Church in Florence Mississippi. Prior to her membership at Greater Enoch Grove, she was a member of New Hope Missionary Baptist Church in Pearl, Mississippi. She was also a member of the Heroines of Jericho Greenhill Court 286. Lorene was a caregiver for years and retired from Hinds General Hospital in Jackson, Mississippi as a Nurse's Assistant in 1992. After her retirement she worked as a caregiver at Ridgeland Court Assisted Living Facility in Ridgeland, Mississippi. She also worked at Rainbow Child Care Center Florence Mississippi helping with the little ones. Lorene was a devoted Mother, Grandmother, Great Gra ther, Auntie and Friend. She leaves to continue her legacy five children, Randolph (Shirley) Taylor Jr. Memphis, Tennessee; Runchy (Roosevelt) Ross; Palma (Willie) Short; Paulette (Anthony) Gary; Melissa Robinson; Hugh Robinson, all of Florence, Mississippi. Sixteen grandchildren: For Randolph Taylor Jr. (Shannon Anderson, Robbie King, Rita Sanders, Jared Anderson, Danielle Taylor, Randolph Taylor III). For Runchy Ross, (Christina Ross, Dedric and SeMoya Ross). For Palma Short (Valarie Taylor). For Paulette Gary (Kadejia Gary, Keya Gary, Anthony Gary Jr.) For Melissa Robinson (Austin Robinson, Amanda and Timaal Bradford). Fourteen great-grandchildren: For Shannon (Savion), For Robbie (Aaliyah, Autumn, Batoria, Gage and Raesean); For Rita (Winter) For Jared (Aaliyah); For Dedric (Quentin, Jalen, Makaria, Aiden, and Makai); For Kadejia (Jayce), and five great great-grandchildren. She also leaves a host of nieces and nephews. Betty and Leroy Pierre, Patricia Cook, Henry Lee Williams, Theresa Williams, Gretchen Johnson, and Merrell Lynn Williams, Glen and Dorothy William, Darryl Williams, Edward and Alice Williams, Kathy Kyles, Doug Williams, Kurt and Ira Williams, Hilda, and Kirby Burgess. Lorene Taylor Mack will be remembered as the last of the Queen nurturers who nurtured the Greenhill Road Village. The Queens who preceded her in death were Gertha Williams and Tommie Jean Williams. To all the Queen ancestors we thank you. You did well.

Psalm 27:1 "The Lord is my light and my salvation; Whom shall I fear? The Lord is the strength of my life; Of Whom shall I be afraid?" Lorene Taylor Mack transitioned into God's arms on Wednesday October 13, 2021, at the age of eighty-two.... View Obituary & Service Information

The family of Ms. Lorene Taylor Mack created this Life Tributes page to make it easy to share your memories.

Send flowers to the Mack family.