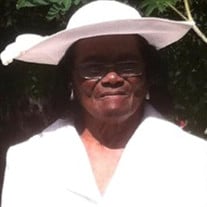 "Well done, good and faithful servant; Thou hast been faithful over a few things; I will make thee ruler over many things. Enter thou into the joy of thy lord." Matthew 25:23 Louise L. Jenkins, affectionately called "Lou", was born July 5, 1929 in Jackson, MS to the late Roger and Roberta Lockett. She obtained her high school education at Lanier High School. She was preceded in death by her husband (Walter Jenkins), daughter (Barbara Ann Bingham), 2 sisters (Vina Mae Jenkins and Kitty Jacobs) and 1 brother (Sonny Lockett). Louise was united in holy matrimony to Walter Jenkins on January 29, 1949 and to this union two children were born; Barbara Ann and Jarvis Mandel. With love and commitment, Louise and Walter were married 63 years until Walter's death in 2012. Their relationship had a very special bond based on their love for one another and for God. Sister Jenkins accepted Christ at an early age and upon marriage joined Mt Elam Missionary Baptist Church under the leadership of the late Reverend R. L. T. Smith. She served as a faithful member of the Missionary Society and the Senior and Sanctuary Choir until her health began to fail. She worked diligently in whatever position she held in the church. She was a quiet person and a child of God that will be remembered for her loyalty, hospitality, warmth, and sense of family. Louise also worked in the community with the Pearl Concordia Club - a group of women working together to meet the needs of the community for over 50 years. Louise worked at the VA Medical Center for 23 years where she later retired. After retiring, she found a new love, caring for her grandchildren. Her joy was hearing the children playing, laughing, and filling the house with love. She knew every Sunday the kids were coming after church to enjoy her cobblers and any other goodies she had prepared. At the age of 92, Louise heard the yoice of Jesus say, "Come beloved and rest a while." She made her transition, Sunday afternoon, April 24, 2022 at 2:00 PM. She went home to be with the Lord after a long battle with Dementia. She never complained about her inability to do what she used to do. She always laughed and smiled through whatever came her way. Louise leaves a legacy of faith and devotion to her family and friends. Louise is survived by her son Jarvis (Wilma); one son-in-law, Charles Bingham; seven granddaughters, sharunda (Shaunelius) Davis of Pearl, MS, Talatha (Tyler) Gibbs of Flowood, MS, Kaylora Bingham of Hattiesburg Ms, Erica Jenkins of Pear, MS, Keisha (Tyler) Brown of Dallas, TX, Amber Jenkins of Ridgeland MS, and Jade Jenkins of Baton ROUge, LA; one grandson, LaDevrin Dixon of Jackson, MS; nine great grandchildren, Ariel Davis, Garrison Davis, Tanner Bingham-Gibbs, ¡aiana Brown, Kaisen Jenkins, Melanie Brown, LaDevrin Dixon, Ir, Naomi Brown, and Ean Stubbs; one sister-in-law, Bobbie Nell (M.C) Gayden of Pearl, MS; one brother-in-law, Elder Willie Jenkins, Ir of Pearl. MS and a host of beloved nieces, nephews, cousins and friends.

"Well done, good and faithful servant; Thou hast been faithful over a few things; I will make thee ruler over many things. Enter thou into the joy of thy lord." Matthew 25:23 Louise L. Jenkins, affectionately called "Lou", was born July 5,... View Obituary & Service Information

The family of Mrs. Louise Lockett Jenkins created this Life Tributes page to make it easy to share your memories.

&quot;Well done, good and faithful servant; Thou hast been faithful...

Send flowers to the Jenkins family.