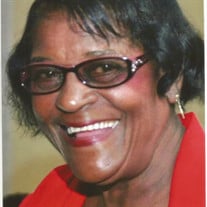 Lucille Haralson Kern was born January 8, 1938 in Collins, MS to Wylie and Addie Luvene. She accepted Jesus as her Lord and Savior at an early age. She became a member of Mount Elam Church in Pearl, MS, where she was a devoted member until her... View Obituary & Service Information

The family of Mrs. Lucille Kern created this Life Tributes page to make it easy to share your memories.

Send flowers to the Kern family.