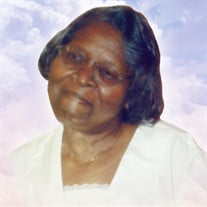 "I have fought a good fight, I have finished my course, I have kept the faith” 2 Timothy 4:7 KJV MRS. LURLEAN RAWLS BOONE was born to the late Jeff Davis Rawls and Rutha Harris Rawls on April 27, 1932. She was the last living sibling of her family. Those who preceded her in death were her sisters: Geraldine Rawls, Catherine Cross Rawls, Ruth Howard Rawls, Mable Lee Rawls, Easther Rawls Stapleton; and brothers: Elizah Rawls, Vernon J. Rawls, Lee Rawls, and Jeff Rawls. On May 7, 1949, Lurlean married Johnnie B. Boone (aka Monkey Joe) and to this union eight children were born. Her oldest child, Elouise Rawls Johnson, was also raised along with the family. Lurlean was a happy-go-lucky spirit. She never met a stranger and would let you know just how she felt! To know her, however, was to love her. If they have a comedy group in heaven, I'm sure she is there joining in and giving them the update from earth. For many years, Lurlean worked at the Mississippi State Hospital in Whitfield, MS. After leaving there, she became a caretaker for two families - The Benton's and The Huff's - until their children were grown. She often referred to them as her "white children and family." Until her health failed, Lurlean was a dedicated member of Sylavarena M.B. Church where she stood her post as an usher for many years and Sundays. She was supportive to all of the pastors of the church, but for some reason when Pastor Marcus Mann was called to Sylvarena along with his wife and daugh ter, she took him in as her grandchild. She also let it be known all the way until the end that he was going to preach her funeral. In so being that it's carried out that way, we expect “Boone Boone” (as many called her) to rest in peace and stay quiet today. She leaves to cherish her memories four daughters: Elouise Rawls Johnson, Annette Boone, Deborah Boone Thomas, Barbara Warren Boone; and three sons: Johnny L. Boone, Ezra L. Boone, and Ronnie J. Boone. Two sons preceded her in death: Victor Thomas Boone and Daryl L. Boone. She also leaves a number of grandchildren, great-grandchildren, and great-great-grandchildren. Mrs. Boone will and has been missed from this community. She did her work and sung her song, but now she would say, Miss me, but let me go. For now I truly am free. To all my black children and to all white don't look down and be in sorrow, for I am now OK. God gave me my wings and I'm now in glory, and here I wish to stay. No pain, no sorrows, and no more to say. Goodbye all my family and friends. I can walk around Heaven all day long.

"I have fought a good fight, I have finished my course, I have kept the faith&#8221; 2 Timothy 4:7 KJV MRS. LURLEAN RAWLS BOONE was born to the late Jeff Davis Rawls and Rutha Harris Rawls on April 27, 1932. She was the last living sibling... View Obituary & Service Information

The family of Mrs. Lurlean Rawls Boone created this Life Tributes page to make it easy to share your memories.

&quot;I have fought a good fight, I have finished my course, I have...

Send flowers to the Boone family.