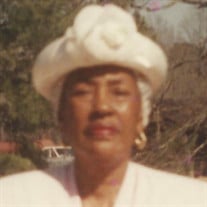 Melvin Lorraine Cain, a woman full of zest for life and known to most everyone as “Nanny," was born April 25, 1928, in Florence, Mississippi. She was the third child born from the union of Master McLin, Sr., and Gussie Kitchens McLin. Nanny began her education at Steep Bank School in Florence, Mississippi, and attended Booker T. Washington in New Orleans after moving there in her late teenage years. Nanny accepted Christ as her Lord and Savior at an early age and was baptized at Good Hope Missionary Baptist Church. Later, Nanny joined Central Missionary Baptist Church under the leadership of Pastor Edward Terry in New Orleans, Louisiana. Nanny moved to New Orleans in the mid to late 1940s. There, she worked at Nolamdis as a seamstress making men's clothing. She also worked as a seamstress at Holiday Inn in the French Quament. After meeting and marring the late Ezell Singleton, she bore a son, Larry Singleton. Later, Namn met and married Willie Cain (deceased)who adored her and showed it by spoiling her daily. Nanny moved back to Florence, Mississippi in the 1980s. She worked as a direct caregiver at Briar Hill Rest Home, Inc. Nanny retired after her years at Briar Hill and began to live a camee life once again. She spent endless hours in her yard during the mornings and late evenings doing what she loved planting flowers. She seemed to have a knack for bringing flowers, planes, and mees back to life. Many of us have a flower bed that she helped start, a tree that she planted in our yands, or a plant that she revived in our homes. Nanny is preceded in death by: her parents, Master, Sr. and Gussie McLin; her husband, Willie Cain; her beloved son, Larry Singleton; three brothers, Master McLin, Jr., Walter McLin, and Arthur McLin, Sr; one sister, Cleo McLin Ideall; three brothers-in-law, Fred Douglas Webb, Sr., Clifford Ideall, Sr., and Charles Haygood; two sisters-in-law, Lillie McLin and Bernadine McLin. Her memory will be cherished by; her loving niece/godchild, Pamela (Wayne) Hervey; three grandchildren, Keiona, Marie and Steven; one great-grandchild, Maya Miller; two brothers, Wesley (Earnestine) McLin Sr. and Sylvester (Dorothy) McLin; four sisters, Doris Webb, Connie Haggood, Delois (John) Hoard and Rosetta (Levertis) Braddy; one aunt, Bobbie Allison; one uncle, Shelton Allison; and a host of nephews, great nephews, great-great nephews, nieces, great nieces, great-great nieces, cousins and friends.

Melvin Lorraine Cain, a woman full of zest for life and known to most everyone as &#8220;Nanny," was born April 25, 1928, in Florence, Mississippi. She was the third child born from the union of Master McLin, Sr., and Gussie Kitchens McLin.... View Obituary & Service Information

The family of Mrs. Melvin Lorraine Cain created this Life Tributes page to make it easy to share your memories.

Melvin Lorraine Cain, a woman full of zest for life and known...

Send flowers to the Cain family.