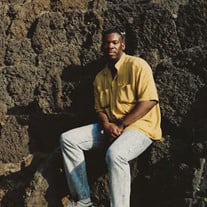 Michael Applewhite was born February 18, 1965 in Brandon, Mississippi to Calie King, and raised by the late Harvey King, his stepdad. Michael had one brother Jeffy David Applewhite who he truly loved and admired. Michael attended and graduated from Brandon High School in 1984. In 1986 Michael joined the Air Force where he was a Hydraulic Mechanic. While Michael was stationed in Dover, Delaware he met his wife Veronica Applewhite and Stepson Ferlando James. Michael accepted Christ at a young age while attending Evergreen United Methodist Church growing up in Brandon, Mississippi. While residing in Florida, Michael and his family united with Praise, Power and Compassion Ministries under the leadership of Elder Darrell Coleman and Co-Pastor Lula Coleman for seventeen years until his passing. Michael was a very active member at his church. He loved the Lord, and not only did he talk the talk he walked the walk. Michael and Veronica got married May 19, 1989 and were married for thirty-one and a half years. Michael and Veronica had two children together, Darius and Danica. Michael had two grandchildren De'Jeir and Zion. Michael loved and cherished his family. He loved to travel and spend quality time with them. Michael had later got sent overseas to Okinawa, Japan with his family for eight years before returning back to the states. In August of 2000 they moved back to the states residing in Crestview, Florida. Michael retired from the Air Force May 24, 2010 and decided to make Florida his home. Michael went on to continue working at Eglin Air Force Base working on computers in which everyone that knew him, knew how much he enjoyed doing computer work. Michael was still employed there until his passing. Michael loved life and lived his life to the fullest. Growing up Michael loved playing basketball. He had a passion for going to the movies, working on computers, taking pictures and of course, grilling. Michael loved his family and friends, taking trips and going on cruises. Michael was a loving father and husband and Michael was an extraordinary person to know. He was always willing to lend a helping hand to anyone without hesitation. Michael leaves to cherish his wife: Veronica; his kids; Ferlando De'Angelo James (Linda), Darius Michael Applewhite (Dominique) and Danica Michiko Applewhite; Grandkids: De'Jeir and Zion Applewhite, His Mom: Callie King, His Brother: Jeffy David Applewhite (Pamela) Uncle: Sam Applewhite(Patty Sue); Percy Applewhite (Louise), Blackhawk, Ms. Aunts: Laura Bates (St. Louis, Missouri) Naomi Kency Jackson, Ms), Abraham (Oda) Applewhite Blackhawk, Ms William Henry Applewhite(Rose) Hartford, Connecticut. His mother-in-law: Barbara James (Jesse Jr.) Brother-in-law: Angelo James, Sister-in-law: Victoria Haysbert, Yolanda James, Margo (Tyrone) Brown Sr., Shawna (Tim) Davis, Host of many nieces and nephews. Preceded in death by: Harvey King(Stepfather), Henry(Mary) Applewhite (Grandparents). Abraham Applewhite (Uncle), Patty Sue Applewhite, Jesse James Jr. (Father-in-law), Anita James (Sister-in-law) Timothy Davis (Brother-in-law), Dynasty James (Great niece)

Michael Applewhite was born February 18, 1965 in Brandon, Mississippi to Calie King, and raised by the late Harvey King, his stepdad. Michael had one brother Jeffy David Applewhite who he truly loved and admired. Michael attended and graduated... View Obituary & Service Information

The family of Mr Michael Applewhite created this Life Tributes page to make it easy to share your memories.

Send flowers to the Applewhite family.