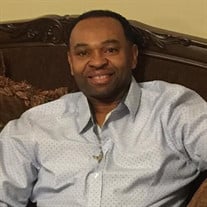 "And God will wipe away every tear from their eyes, there shall be no more death, nor sorrow, nor crying. There shall be no more pain, for the former things have passed away". Revelation 21:4. Michael Ansary Douglas was born on December 19, 1963, in Canton, MS, to the late Mr. and Mrs. John and Icyola Douglas. Michael was baptized and filled with the Holy Ghost at Greater Bethlehem Temple under the late great Bishop Phillip Coleman, Sr. Michael attended Sacred Heart Elementary and Holy Child Jesus High School and graduated in 1981 from Velma-Ware Jackson High School in Camden, MS. He continued his education at Coahoma Community Jr. College, where he played the bass drum and graduated in 1983 with an Associate's Degree in Electrical Engineering. Michael enrolled at Jackson State University, becoming a part of the "Sonic Boom of the South," He also played the bass drum. Michael continued his love for Jackson State University, where you could find him tailgating and attending the football games. Michael entered the work world, and his first professional job was at Shippers Express in Jackson, MS. He moved on up a little higher to Penske and worked as a Service Manager. If you know Michael Ansary Douglas, he did not stop there because he believed in excellence. His last employment was at Nissan Motor Company as a Material Handling Manager, where is received many accolades for his accomplishments. Michael was born into eternity on April 3, 2022. He leaves to cherish his memories, the love of his life; Ms. Louvetta McIntyre (Fiancée) of Sandhill, MS, two beautiful daughters; Shevetta Leflore (Calvin), Carthage, MS; Brittany Douglas Stamps; two special daughters; MyKila Walker and Lyric McIntyre. Six siblings; Deborah Douglas (Michael), Roy Douglas (Carmia), Tony Douglas (Veeta), Thomas Douglas (Arnitra), Rhonda Douglas-Flynn (Frederick), and Derrick (Flora). Grandchildren; Semyia, Semoria, Alora, Abreale, Juel, Michael, Mikhal, Jabrael, and Dillon Stamps, and two great-grandchildren. A special cousin, Willie Johnson, and a host of relatives and friends.

"And God will wipe away every tear from their eyes, there shall be no more death, nor sorrow, nor crying. There shall be no more pain, for the former things have passed away". Revelation 21:4. Michael Ansary Douglas was born on December 19,... View Obituary & Service Information

The family of Mr. Michael Ansary Douglas created this Life Tributes page to make it easy to share your memories.

&quot;And God will wipe away every tear from their eyes, there shall...

Send flowers to the Douglas family.