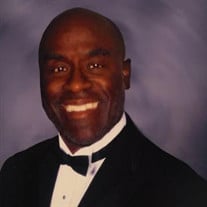 Michael Gregory Morris was born on May 27, 1963, to Nelson and Wessie Morris in Hollywood, Florida. He accepted Christ at an early age. A very self-motivated and conscientious student, he was always an avid reader, hungry for knowledge. Michael... View Obituary & Service Information

The family of Dr. Michael Gregory Morris created this Life Tributes page to make it easy to share your memories.

Send flowers to the Morris family.