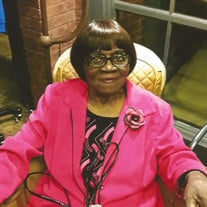 Ola B. Haygood was born October 21, 1924 to the late Mr. Andrew Singleton and Ms. Georgia Hicks Taylor in Star Mississippi. After the death of her father, Ola and her mother moved to Pearson Mississippi at the age of 12 years old. After moving to Pearson, Mississippi, Ola's mother, Georgia Taylor, became an entrepreneur. She washed, sewed clothes, and made hats and quilts to sell to others. She also cooked and baked pies and cakes to support their family. This was the start of Ola's ambition of sewing and making her own clothing, where she later became one of the first black sales person and window dresser for Sears Department Store in the downtown area of Jackson, Mississippi. Her expertise was not only recognized on a local level but the district managers recognized her talent and asked her to become the traveling window dresser. She accepted the position and her talent for fashion and designing was seen around the state, in the windows of the company's newly opened stores. But Mrs. Ola B. Haygood had other goals and dreams. First to open her own business as a hairdresser and cosmetologist. She enrolled in the Davis Beauty School located on Pearl Street in Jackson, Mississippi for cosmetology and this started her journey of being a successful entrepreneur. Secondly, to complete her education. She received her GED from the Mt. Elam Preparatory School at the young age of 70 years old. She enjoyed life. She had a rich personal life, as she would describe it. She was very proud of the two goals she had achieved, starting her own successful business and going back to school to complete her education. Ola was joined in Holy matrimony to Samuel Pempleton, Sr. at the age of 23 on October 9, 1942. After they departed from 17 years of marriage, in the 1960's she met and married her 2nd husband, Mr. Thomas Haygood. They were married for over 23 years until his death in 1987. Ola B. Haygood was a servant of God on earth and now she is serving in the Kingdom of Heaven. While here on earth, she served her church and her community with dignity and respect. She was a true pillar of the Pearson community. She was also a member of a host of ladies auxiliaries and organizations. She came from a generation of highly respected Christians and an entrepreneur line of women, which she upheld until her Heavenly Father whispered to her, "Come on home my good and faithful servant". Ola B. Haygood departed this life on Thursday, September 23, 2021. She was preceded in death by her father, Andrew Singleton; mother, Georgia Taylor; husband, Thomas Haygood; brother, Jimmie H. Singleton; two sons, Glen Melvin Holmes and Samuel Pempleton Jr; and great-great grandson, Jayden Pempleton. She leaves to cherish her memory, five grandchildren; Orlandus Mims, Seamuel Mims, Latrina Ross (Jonathan Ross), Consuela Holmes, and Patricia Pempleton; eight great grandchildren; Kahlil Ross, Kyla Ross, Rodney Bethel, Eric Bethel, Jasmine Stevens, Kenyantra Bunton, Jonathan Pempleton, Frankie Pempleton; ten great-great grandchildren, Lilah Roby, Jhace Roby, Indya Kelly, Kairo Ross, Jontavious Lewis, Frankie Pempleton Jr., Jazmine Pempleton, Chibra Pempleton, Jade Pempleton, Aiesha Pempleton; one great-great great grandson, De'untae Pempleton, and a host of nieces, nephews, and extended grands, great-great grands and great-great great grands. Ola (Madea) will truly be missed by all who knew and loved her.

Ola B. Haygood was born October 21, 1924 to the late Mr. Andrew Singleton and Ms. Georgia Hicks Taylor in Star Mississippi. After the death of her father, Ola and her mother moved to Pearson Mississippi at the age of 12 years old. After moving... View Obituary & Service Information

The family of Mrs. Ola B. Haygood created this Life Tributes page to make it easy to share your memories.

Send flowers to the Haygood family.