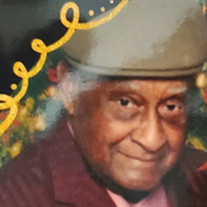 Otis Cowan was born March 29,1918 in Conway, Arkansas later moving to Galesburgh, Illinois. He later returned to Conway, Arkansas then to Florence, Mississippi where he resided with his wife of 10 years Norma Jean Cowan. He was preceded in death... View Obituary & Service Information

The family of Mr. Otis Cowan created this Life Tributes page to make it easy to share your memories.

Send flowers to the Cowan family.