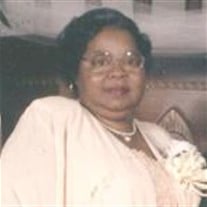 Patricia Ann Hobson Hamilton Keyes was born on February 2, 1949 to the late Clemmie L. Hobson Jenkins and Eugene Dillion in Brandon (Rankin County) Mississippi. She attended the one room schoolhouse at Pearlie Grove until about the 5th grade when she began school at McLaurin. She was very active in school. She was a cheerleader and honor student. At the age of 14, she moved to Chicago, Illinois where she attended Hyde Park Academy and graduated. She furthered her education by attending Loop Junior College, Cook County School of Nursing, Worsham College of Mortuary Science, and Kennedy College. She was under the guidance of her uncle, Louis E. Hobson and wife Carol. While residing there, she attended Tabernacle Baptist Church under the pastorship of her uncle Dr. Louis Rawls. She served in several capacities in the church there. She married Harry Hamilton after graduation and to this union, two sons were born, Clifton and Carlton Hamilton. In 1976, she married the late Mr. Jerry Keyes, Jr. and to this union a beautiful set of twins were born, Sean and Chandra Keyes. After relocated back to Mississippi, Keyes became a member of, Mt. Elam M.B. Church in 1976, under the leadership of Pastor Jessie Horton. For a period of time, she was a member of Jerusalem M.B. Church under the leadership of Pastor Dennis Grant. She later renewed her membership at Mt. Elam until her health demised. For those who knew her, she served her church and community dutifully and faithfully during her lifetime. On May 4, 2021, God touched the hand of His dutiful servant and spoke softly from the Merit Health Rankin Hospital, saying "Come home my loving child, you have a fought a good fight; finished the course, come home and rest." She was preceded in death by her husband of 40 years, Mr. Jerry Keyes, Jr.; her mother, Mrs. Clemmie L. Hobson-Jenkins; grandmother, Ms. Linnie B. Hobson; two brothers, Donnie Hobson and Ronnie Hobson; grandfather, Mr. Augusta "Gus" Hobson; one grandson, C.J. Hamilton' one great-grandchild, Kennedy; two (2) uncles, Y.C. Hobson and Willie Augustus Hobson; two (2) aunts, Mamie L. Hill and Gussie M. Pope. She leaves to cherish her memories: five (5) children, Mr. Jeffery (Paulette) Hobson, Mr. Clifton (Charlene) Hamilton, Mr. Carlton (Keisha) Hamilton, Mr. Sean (Cassandra) Keyes and Ms. Chandra A. Keyes, all of Pearl, Mississippi; sixteen (16) grandchildren and Nine (9) great-grandchildren; one (1) sister Bonnie Lewis of Pearl, Mississippi, three (3) loving and devoted brothers, Welton (Georgia) Singleton of Pearl, Mississippi Rudolph Hobson, Darry Hobson, of Brandon, Mississippi; and a host of nieces, nephews, cousins and many, many friends.

Patricia Ann Hobson Hamilton Keyes was born on February 2, 1949 to the late Clemmie L. Hobson Jenkins and Eugene Dillion in Brandon (Rankin County) Mississippi. She attended the one room schoolhouse at Pearlie Grove until about the 5th grade... View Obituary & Service Information

The family of Mrs. Patricia Ann Keyes created this Life Tributes page to make it easy to share your memories.

Send flowers to the Keyes family.