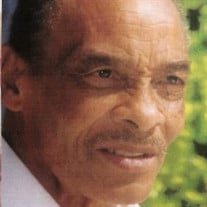 RC Trigg, 85, passed away in his sleep at home on Saturday, August 28, 2021, in Flowood, Mississippi. RC was born on April 13, 1936, in Rankin County, Mississippi. He was the second child of Rev. Handy Trigg and Flarzell Reed Trigg. He was preceded in death by his parents, his older brother Robert Lee Trigg, his sister Flora Bell Shaw, his second wife Mary Cooper Trigg, nephew Randy Trigg, and son-in-law, Edward Turner Jr. He is survived by his children, Eileen Trigg-Turner, Lawrence Trigg and his wife, Tracey; Leonard Trigg; Alberta Barnhard and her husband, Travis; Clara Parker and her husband Erick; Jason Trigg; twins Tyrone Trigg and Paulette Trigg; his brother-in-law Neil Shaw; sister-in-law, Precious Trigg; his nephew, Kevin Rhone, 3 nieces Natalie Rhone, Daphne Rhone-Boykin, and Aleta Trigg Pittman; 14 grandchildren; 8 great grandchildren and a host of extended family and friends who all cherish him dearly. He spent his formative years on the family's 25 acres of land on what is now Henderson Road in Flowood. He graduated as valedictorian from Carter High School in 1954. Soon after, he moved to Los Angeles, California where he met Bertha Mae Mills. They married on March 13, 1960, and from their union came 8 children: Eileen, Lawrence, Leonard, Alberta, Clara, Jason, Tyrone and Paulette. The best gift he gave us his children can be found in Ephesians 6:4. "...bring them up in the nurture and admonition of the Lord." In 1965, he moved his young family to Suisun City in Northern California. A few years later, he bought his first house across the tracks in Fairfield. He was employed by Solano Garbage Company for 32 years and retired in June 1998. He moved back to the family land in Mississippi to help take care of his mom and to enjoy his retirement. RC and Mary joined Sweet Home Church of Christ Holiness and faithfully attended. He loved his church family and other members and friends he met that attended different churches in the area. RC enjoyed a variety of social activities throughout his lifetime. Fishing was near the top of his list. He fished any chance he could and although he had a core group of fishing buddies, he would take anyone with him including his kid's friends. RC was a great fisherman. He has caught numerous large sturgeons! One was 6ft long and a whopping 82lbs! He has also caught many 30lbs and larger striped bass in Rio Vista and Knights Landing, California. He had so many stories about catching big fish that people did not believe it. Because of that, RC started taking pictures of the fish so he had proof to go with the stories! And now, we have so many pictures of him with fishes. When he moved to Mississippi, he continued his fishing hobby as he and Mary would go fishing together. They enjoyed fishing at the catfish farms and the Ross Barnett Reservoir. He also loved playing basketball. He could not pass up an empty court. At the family house on 206 DeSoto Drive in Fairfield, California, he put up a basketball hoop above the garage with the driveway as the court. His children loved it because their house became the neighborhood court. Oh, the games and memories made there! RC had a running left-hand hook shot that was nearly impossible to stop. He played until he was 50 years old and the ballers at Tabor Park in Fairfield titled him the "Original OG". He was a mentor and fa ther-figure to many of the young men that he met on the court. RC never met a conversation he didn't like. He loved to talk. Especially in person as it was more personal and enjoyable to him. In California, he could be found hanging out and shooting the breeze with his friends at local restaurants: Sambo's, Seasons, Sandy's, Nations, Denny's and the bait shops; Virgil's and Lara's. In Mississippi, he spent time with his friends at Waffle House and Krystal. One thing to remember, when talking with RC - you better have your facts and thoughts together because he was going to challenge you to prove your point! RC was a great example of the biblical "Good Samaritan". If he could help you - he DID! And he did not brag about it. RC helped so many people! There are people in heaven (now and in the future) stopping by to tell him, "Thank you! Thank you for giving to the Lord and being obedient." Matthew 25:40 is a fitting description of his life. "... As you did it to one of the least of these... you did it to me."

RC Trigg, 85, passed away in his sleep at home on Saturday, August 28, 2021, in Flowood, Mississippi. RC was born on April 13, 1936, in Rankin County, Mississippi. He was the second child of Rev. Handy Trigg and Flarzell Reed Trigg. He was preceded... View Obituary & Service Information

The family of Mr. RC Trigg created this Life Tributes page to make it easy to share your memories.

RC Trigg, 85, passed away in his sleep at home on Saturday, August...

Send flowers to the Trigg family.