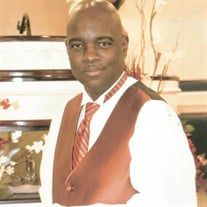 Roderick was born in Rock Island, Illinois on December 1, 1996 to Henry and May Frances Cobb. In 1967, they moved to Tupelo, MS, where he was educated in the Union County School Division and graduated from Saltillo High School. "I Need Thee,... View Obituary & Service Information

The family of Mr. Roderick Allen Cobb created this Life Tributes page to make it easy to share your memories.

Send flowers to the Cobb family.