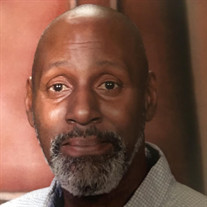 Sammy David Solomon, Jr. departed this life on March 29, 2021, with his family by his side at University Medical Center in Jackson, MS. He was born May 24, 1968, in Los Angeles, CA, to the late Sammy Joe and Almytris Harvey-Solomon. His parents relocated to Mississippi when Sammy was about 5 years of age. He was the firstborn and only son born to the 41-year marriage union of Mr. and Mrs. Solomon, which ended with Sammy, Sr. May 19, 1996. Sammy David attended Pisgah High School in Sandhill, MS. He left school around 1987, received his GED a few years later, and served in the army for approximately 2 years based in Georgia. On October 2, 1988, he married Cynthia Kimble of Morton, MS. From this union, they had one son, Sammy Jamond Solomon of Jackson, MS, and assisted in raising his stepson, Craig Kimble of Winterhaven, Florida. Before Sammy became ill, he was a skilled mechanic and everyone's handyman. Sammy was gifted in painting, construction work, plumbing, garden work, and making people laugh. He was a wonderful brother, a great son, a loving father, a respectful nephew, and a devoted friend. He put his heart into everything that he did and into everyone whom he met. In the later years of his life, he made so many people love and respect him for his kindness, honesty, and determination to live for Jehovah God and no longer for himself. His interest included studying God's word with Jehovah's Witnesses, family, riding his motorcycle, and being entertained by NetFlix. Whenever he was able, Sammy devoted much of his time and energy as a caregiver to family members, especially his mother. Almytris, until she passed away at age 80 on February 12, 2019. Sammy is survived by his two (2) sisters, Tynette Solomon-Miller and Samatha Joyce Solomon; halfbrother, Justin Ficklin; one son, Sammy Jamond Solomon and a stepson, Craig Kimble; 1 niece, Alexandrea N. Miller: one (1) granddaughter, Sariyah Brown; the love of his life/fiancée, Annette Puckett and a host of aunts, uncles, cousins, and friends. May we continue to keep Sammy's memories alive in our hearts.

Sammy David Solomon, Jr. departed this life on March 29, 2021, with his family by his side at University Medical Center in Jackson, MS. He was born May 24, 1968, in Los Angeles, CA, to the late Sammy Joe and Almytris Harvey-Solomon. His parents... View Obituary & Service Information

The family of Mr. Sammy David Solomon Jr. created this Life Tributes page to make it easy to share your memories.

Send flowers to the Solomon family.