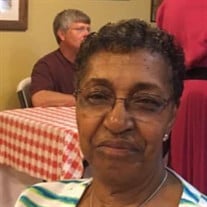 Mrs. Sarah Ann Andrews' footprints ceased in the sands of time on Monday, March 29, 2021 at the age of 88. Sarah Ann was born on July 4, 1932 to the late Sam & Callie Wright of Brandon, MS. Three sisters and five brothers preceded her in death.... View Obituary & Service Information

The family of Mrs. Sarah Ann Andrews created this Life Tributes page to make it easy to share your memories.

Send flowers to the Andrews family.