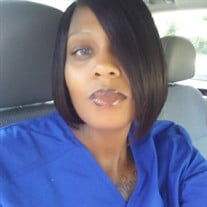 STACY R. GETER-COLEMAN was born January 21, 1981 in Jackson, Mississippi to the late Bobby T. Brooks and Annie Geter. She concluded her life here on earth March 11, 2020 at Hospice Ministries in Ridgeland, Mississippi. She was preceded in death... View Obituary & Service Information

The family of Mrs. Stacy Geter Coleman created this Life Tributes page to make it easy to share your memories.

Send flowers to the Coleman family.