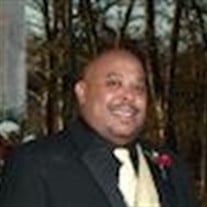 A Man of Integrity. Funny, loving, opinionated, hard-working, protector, provider, and confidant are all words that describe Stanley Demond Mason. Aanley Demond Mason was born on June 28, 1978 in Bolton, MS to Samuel Glen and Shirley (Henderson) Mason. Stanley was the older of two children to this union. He departed this life on Friday, September 6, 2019. On this life's journey, several loved ones have gone on to be there to welcome Stanley home. He was preceded in death by his parents, Sanuel Glen and Shirley (Henderson) Mason and his sister-in-law, Katrina Banks. Stanley grew up in Bolton, MS where his family instilled in him the importance of family, hard work, faith, and caring for oth ers. Stanley confessed Christ at an early age and became a menuber of Orange Hill MB. Church under the leadership of the late Dr. John L Brown and then later under Rev. Albert Lewis. Leadership was instilled in Stanley as early as a teenager. While at Orange Hill, he served as the Superintendent of the Sunday School, a member of the Youth Auxiliary, Junior Choir, and a member of the Orange Hill Masonic Lodge. Later in life, Stanley joined the New Testament Baptist Church in Hot Springs, AR under the leadership of the late Rev. Rodney Dennis. Stanley became a huge part of the New Testament Church family participating in Wednesday Night Bible Study and becoming a Youth Sunday School Teacher. After moving back to Arkansas in May 2019, Stanley ensured his family attended local church services every Sunday. Stanley's belief in Christ and strong faith remain with him throughout his entire life. Stanley began his educational career at Mixon Elementary School and Utica Junior High School. Stanley attended Hinds Agricultural High School where he was involved in several organizations including the football team, Future Farners of Amer ica (FFA) and Technology Student Association (TSA). In 1996, Stanley reigned as Mr. Hinds Agricultural High School. While at Hinds AHS, Stanley became affectionately known as "Studd” and the name followed him for the remainder of his life. ter graduating from Hinds AHS in 1996, Stanley began his collegiate career at Alcorn State University. If you knew Stanley, you knew his love for Alcorn. His alma mater was dear and true to his heart. He majored in Biology with an emphasis in Agriculture. Stanley graduated with his Bachelor of Science degree from Alcorn State University in 2001. While at Alcorn, Stanley was in several organizations including the ASU Gospel Choir and LSMAP. On April 8, 2000, Stanley was initiated into the Delta Kappa Chapter of Alpha Phi Alpha Fraternity, Incorporated. Stanley bled black and gold so much that he even chose those as his wedding colors. He was a proud Alpha man! Agriculture was always a piece of Stanley's heart even as young as a child. To no surprise, Stanley chose this field for his ca reer. Professionally, Stanley was a Regional Soil Scientist for the National Forestry Service. In May 2019, Stanley was re assigned as a Deputy District Ranger in Paris, Arkansas. Stanley resided there with his family. MA On Saturday, October 15, 2016, Stanley “re-met" Mikesia Gibson at an Alcoru Homecoming game. They previously attended Alcorn together. They started talking on the phone that Sunday and the rest is history. They got engaged on June 4, 2018 and were married on December 2, 2018. Although married for such a short time, Stanley loved his family and prided himself in be ing a family man. Whereas Almighty God in His Infinite Wisdom saw fit that it was his time to enter into His gates, Stanley leaves behind his wife, Mikesia Mason; his daughter, Kayla Jones; his sister, Shamekia L Mason; grandparents, Cleophas and Emma Mae Hender son; one sister-in-law Angel Flags; one brother-in-law, Terrence Griffin; nephew, Terrence Griffin II; niece, Kennedy Griffin; mother-in-law, Sanderlean Banks and father-in-law, Carlton (Regina) Hutton. Special family members include: step-mother, Dorothy Harmon; siblings: LaShunda (Brad) Robinson, Jillian Harmon, Mario Harmon, and Felton Harmon. His memory will also be remembered by his God children--whom he loved dearly--and a host of uncles, aunts, cousins, and friends.

The family of Mr. Stanley Demond Mason created this Life Tributes page to make it easy to share your memories.

Send flowers to the Mason family.