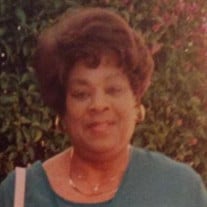 Ms. Susie Jeanette McLin, daughter of the late George and Virginia Pierce McLin was born December 13, 1935 in Sandhill, Mississippi. She graduated from Sandhill School in Sandhill, Mississippi where she was an avid basketball player and enjoyed performing in school plays. After high school she attended the historic Piney Woods School Junior College in Piney Woods, Mississippi founded by Dr. Lawrence C. Jones in 1909. At an early age, she professed her faith in Jesus Christ and joined Lee Chapel Missionary Baptist Church in Sandhill, Mississippi. Jeanette moved to Springfield, Illinois after college became gainfully employed by St. John's Hospital. Several years later, she relocated back to Mississippi and continued her career in health care at the S.V. Montgomery Veteran's Administration in Jackson, Mississippi. She remained there for over 28 years until retirement. During her tenure, she received numerous awards for her active involvement in many facets of her career. After her retirement, she dedicated much of her time caring for her late brother Lloyd who suffered from a pulmonary disease until his expiration. She also acted as a mother figure to her nieces and nephews although she never birthed children of her own. Before her own health declined, she loved to cook, try new restaurants in town, go on shopping sprees with her baby sister Ruth, share conversations with her close friends and travel to various places. Shortly after her transition, her journal was discovered with sayings pinned by her— “God haven't given up on me, God makes things happen and God is going to give me a new beginning." She was an individual who always had a bright spirit and loved to laugh and share stories about her childhood working on the family farm, walking to school down the dusty roads, and the good old school days. On September 14, 2020, God truly gave her a new beginning as she departed this earthly life in exchange for eternal life. She leaves to cherish her sweet memory, her baby sister, Ruth Boyd of Morton, Mississippi; one sister-in-law, Johnnie McLin of Oakland, California and a host of nieces, nephews, relatives and friends. Her sister McNoyr McLin and four (4) brothers, Leon, Lloyd, Barnie and Lawrence McLin preceded her in death.

The family of Ms. Susie Jeanette McLin created this Life Tributes page to make it easy to share your memories.

Send flowers to the McLin family.