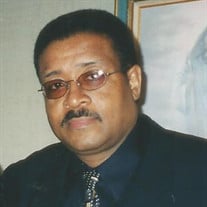 Thomas James Anthony was born August 1, 1952 to the late Tommie & Lue Emma Anthony in Canton, MS. The third of eight children, Thomas was raised in a Christian home where he was taught the Word of God and the importance of living a life of strong character, integrity and selfless service to others. He received his formal education at Rogers High School in Canton, MS graduating with the class of 1971. Thomas was considered an introvert by nature, but he loved spending time with family and friends. Family functions were of the utmost importance to him. Therefore, no sacrifice was too great in order for him to attend family weddings, graduations, birthday & anniversary celebrations and other activities. To leave Milwaukee on Friday to attend a family function in Mississippi on Saturday and return to Milwaukee on Sunday was a sacrifice that he made often and with great joy. He had a passion for bowling and was awarded many trophies. He also had a love for cars. He loved owning them, renting them, going to car shows and even occasionally talking his wife into going to the race track with him. On August 7, 1965, at the age of thirteen, Thomas accepted Christ under the leadership of Reverend C. H. Hart at Stokes Chapel M. B. Church. Here he began his work in the church as an usher and choir member. In 1972, Thomas left Mississippi and established residency in Milwaukee, Wisconsin. He was gainfully employed by C&D Technology (formally Globe Union) for 42 years after which he retired and returned with his wife to Mississippi . On August 24, 1974 he married his best friend and soul mate and remained a devoted and loving husband for 46 years. They were blessed with one daughter, Tekeria Anthony. Thomas united with Pilgrim Rest M. B. Church in Milwaukee, Wisconsin under the leadership of Reverend Leroy B. Mixon. After Reverend Mixon retired, he continued to serve under the leadership of Dr. Martin Childs, Jr. Thomas loved being in the background and serving others. He was a servant at heart. He served as an Ordained Deacon, a Sunday School Teacher, a member of the Transportation Ministry, the Benevolent Ministry, the Resting Place Ministry (housing for the homeless), the Layman Team and led the Couple's Ministry along with his wife. He was eager to volunteer as one of the drivers to bring goods from Milwaukee to Mississippi for the victims of Hurricane Katrina. After returning to Mississippi, Thomas was led by the Spirit to unite with True Vine Baptist Church where he was a regular attendee of Sunday School, Bible Study and Worship Service until his health began to fail him. On Monday, May 3, 2021, Bertha, Tekeria, and other family members surrounded Thomas as he faced the sunset of his days on earth and entered his eternal rest. He has left indelible impact to be remembered by his devoted and loving wife of 46 years, Bertha Anthony; two daughters, Tekeria Anthony and Victoria Dunn; one god-daughter, Especial Robinson; one special granddaughter, Yorel Anthony; two grandsons, Jeremy Nichols and DeAngelo Jackson; two great-grandchildren; three sisters: Mattie Burton, Maggie Anthony and Ora Lee Anthony; three brothers: L.C. Mitchell, Leo Anthony and Leroy Anthony; An amazing mother-in-law, Rosie Luckett: Four sisters-in-law; Margie Mitchell, Linda Anthony, Ruth Manney and Minnie George, Two aunts; Lillie Bell Franklin and Alma Hughes; Three uncles, R.C. Hughes, J. C. Hughes (Gladys) and Fred Hughes. One lifelong friend, Booker T. Lott, Milwaukee, WI. Thomas was preceded in death by his parents and one brother, Ollie James Anthony.

Thomas James Anthony was born August 1, 1952 to the late Tommie & Lue Emma Anthony in Canton, MS. The third of eight children, Thomas was raised in a Christian home where he was taught the Word of God and the importance of living a life of strong... View Obituary & Service Information

The family of Mr. Thomas James Anthony created this Life Tributes page to make it easy to share your memories.

Send flowers to the Anthony family.