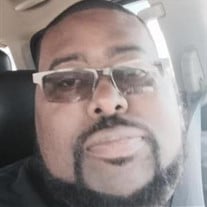 A Great Man who has Received Life’s Greatest Reward A man easily and immensely loved, Vershawn E. Green, was born on January 6, 1975, to Virginia Washington and the late Kenny Smith in Detroit, Michigan. Although he spent much of his latter years in Brandon and Jackson, Mississippi, anyone who knew him for one second immediately understood his affection for “The D.” Vershawn had story after story about Detroit because he absolutely LOVED his city. Shawn loved and knew God for himself, and as a father, those values would be poured into those he held most precious-his family, at Shiloh Missionary Baptist Church. There is no question is he now safely wrapped in the arms of the Lord. Prior to graduating from McLaurin High School, Vershawn held a job at Western Sizzlin. This would be the place where he would meet his forever best friend, Melissa Norwood (Green), and they would choose to journey together to create their family with four beautiful children: Devonte, Christopher, Tyler, and Chelsea. Their friendship and love for their children was indeed true as the saying goes, “until the end of time.” Shawn was extremely passionate when it came to his family. He worked hard, provided for them, and made sure they were covered at all costs. His work ethic remained strong until his career with Nissan came to an end. He loved his sons and was hands-on in helping them evolve from boys to men. He loved his Chelsea and protected her as any daddy’s girl needs to be protected. He made sure his children knew and felt the meaning of a father’s love. He was their best friend. Vershawn was over-the-moon excited about being a PawPaw! Whether morning or night, he spoke to his grandchildren daily, and he made sure they knew how much he loved them. “PawPaw’s Babies” will know him and his legacy forever. The man who loved guns, cars, BBQ, and family took his bright smile and “real talk” to Heaven’s entryway on September 4, 2021. He was welcomed at Heaven’s Gate by his Twin, Vincent (Sharron) Green of Brandon, MS; his baby brother James (Yolanda) Green of Jackson, MS, and his grandmothers Hazel King & Vernell Green of Detroit, MI. Left to hold his memories are his best friend Melissa Green, and their children Devonte (Ivanna), Chris, Tyler (Alicia), and Chelsea (Micah) of the Greater Jackson, MS area. Grandfather, James Green of Detroit, MI; mother, Virginia Washington of Detroit, MI; sister, Shelia M. Washington of Atlanta, GA, and grandchildren EJ, Hadleigh, Kenzie, Hayzel and MaKayla of the Greater Jackson, MS area. His memories will also rest in the hearts of his aunts, uncles, nephews, cousins, friends, and Nissan family.

A Great Man who has Received Life&#8217;s Greatest Reward A man easily and immensely loved, Vershawn E. Green, was born on January 6, 1975, to Virginia Washington and the late Kenny Smith in Detroit, Michigan. Although he spent much of his... View Obituary & Service Information

The family of Mr. Vershawn E. Green created this Life Tributes page to make it easy to share your memories.

A Great Man who has Received Life’s Greatest Reward

Send flowers to the Green family.