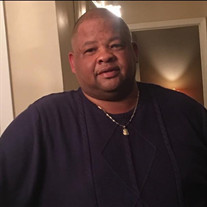 Vince Edward Jones was a native of Pelahatchie, Mississippi. Where he attended Pelahatchie High School. On February 11, 2021 the life of Vince Edward Jones was departed at St. Dominic Hospital in Jackson, Mississippi. Vince was born on November 27, 1965 in Pelahatchie, Mississippi to Jimmy and Addie Kaye Magee. In 2004 he later moved to Jackson, Mississippi after joining the union with his wife Alanda Williams-Jones and step daughter Keiona Robertson and their daughter Valencia Jones. Vince had additional children that was brought to the family, Latoria Wash, Velisha Wash and Vince Jones, Jr. Vince was Self-employed at J and J Tire Shop of Jackson, Mississippi. In 2016 the Jones family became a member of New Horizon International Church of Jackson, Mississippi. Where Vince enjoyed fellowship and Sunday Service. Vince had many different hobbies ridding motorcycles and traveling the highway and watching football games. His favorite team was the Cowboys. Vince had a big heart and he was that person who everyone went to, If he couldn't fixed the problem he would direct you to someone who could help to assist you. He always had an answer for you and never expect anything in return. He was full of life and always had a genuine smile on his face. The present of him entertaining to any one and every one who was around him Vince was a person who wore many of hats, who would give you the shirt off his back. To know him was to love him. Vince was very passion with his family and friends that he adored more than life itself. He would never fell to greet you with open arms and warm everlasting smile that will leave the brand in your heart with confidence and integrity ,He was a man of his word. Vince Edward Jones leaves to cherish his wife of 19 years. Alanda Williams-Jones of Jackson, Mississippi and (three) daughters Valencia Jones of Jackson, MS; Velisha Wash of Brandon, MS; Latoria Wash of Brandon, MS .but reside in Louisville Texas. (one) Son " Vince Jones, Jr" of Jackson, MS. (one step daughter) Keiona (Jeremy) Robertson of Sioux City, Iowa. (ten grands) Zykeria Knight, Galiyah Williams, Gamya Williams , Skylar Wash of Brandon, MS. Carl Sanchez, Carlia Sanchez, Ta'Kahia Sanchez, Alayla Sanchez, Bryceton Jones, Convinceon Jones of Jackson, MS. (four sisters) Patricia (Timothy Spann) of Jackson, MS; Stephanie Magee of Pelahatchie, MS; Linda Jones-Levi of Atlanta, GA; Lee Kennedy of Louisiana, MS; (two brothers) Jimmy (Felisha Magee); Jonathan (Sadie) Magee of Pelahatchie, MS. He leaves to cherish a host of nieces, nephews, cousins and friends (three aunts who have preceded in death; (grand mother) Mattie Burks.

The family of Mr. Vince Edward Jones created this Life Tributes page to make it easy to share your memories.

Vince Edward Jones was a native of Pelahatchie, Mississippi....