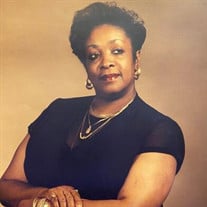 Virdene "Kitten” Edwards Johnson, was born on March 30, 1953 to the late Mr. Charlie Willie and Mrs. Lula Mae Mayers, of Brandon, Mississippi. Virdene attended Carter High School and graduated from Brandon High School, Brandon, Mississippi in 1971. At an early age, she gave her life to Christ at Miracle Temple Church of Deliverance under the leadership Dr. T. J Calhoun. She later moved her membership to Pilgrim Rest M.B. Church under the leadership of Dr. Ava S. Harvey, Sr. In 1974, Virdene meet Larry D. Edwards, at the Baptist Hospital and they were united in Holy matrimony in 1974, and to this union, two (2) children were born; Talmadge and Kimberly. Virdene was a retired nurse and worked in that capacity for twenty-eight (28) years. She cared for many during her nursing career at Hinds General and in her later years at the Mississippi State Hospital, where she retired as a nurse. She loved what she did as well as those that she cared for. There was not a day that went by and she didn't talk about the individuals she cared for. She was a fashionista, that loved to look good everywhere she went. You can always count on her to be adorned in her jewelry. She later met Demetrius Johnson and they were united in Holy matrimony. On January 8, 2022, she departed this life to begin her brand-new life in the presence of the Lord. She was preceded in death by her sister, Brenda Fay Mayers-Scott and brother JoeDan "Charles" Mayers. She leaves her cherished memories to her children, Talmadge Edwards and Kimberly Edwards Harvey, both of Brandon, Mississippi; her grandchildren, Summer, Deion "DJ", Ty'Marah and Dylan; two (2) great-grands, Deion II and Kaison; three (3) sisters, JoAnn (Louis) Johnson of Pelahatchie, Mississippi, Linda Calhoun of Brandon, Mississippi, and Evelyn Wilson of Baltimore, Maryland; two (2) aunts, Ruby Jones and Betty Jones; one (1) uncle, John Henry (Ruby Jean) Walker, all of Brandon, Mississippi; one (1) god-daughter Pamela Jones and one (1) god-son, Rodney Calhoun and a host of nieces, nephews, cousins, relatives and friends.

The family of Ms. Virdene Edwards Johnson created this Life Tributes page to make it easy to share your memories.