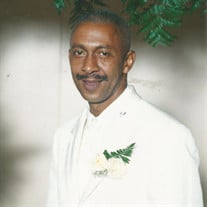 Wayne Burgess Harvey, the fifteenth of 16 children, born to the late Sallie Mae Lloyd Harvey and David Harvey, born December 5, 1954, and was called home to be with the Lord January 26, 2021. His Faith Wayne united with the Oak Grove MB Church at an early age, where he remained a member throughout his life. His Marriage and Children On June 14, 2003, he united in holy matrimony to his life long love, Jessie (Sue) Jones Harvey. He was the father of two children, namely: Calvin McLin and Demetrius Hicks. His Character He attended Jackson State University and Hinds Community College and was a diehard "Tiger." Wayne enjoyed the simplicities of life and loved people, especially his family. Despite a quiet facade, he never met a stranger that he could not make a friend. This hands-on-man believed he could do it (if it could be done) whatever the challenge. As a long-time employee (SP Plus Corporation), he demonstrated this attitude as he helped maintain the largest conglomerates of parking facilities in Jackson, MS. Before that undertaking preparing concrete for distribution at Interstate Concrete Company, and before that causing a Washing Machine to perform at maximum capacity for Donjieux's, of Jackson. Should you need a house built in Pelahatchie, MS, a roof replaced in Slidell, LA; a broken down tractor fixed in Leesburg, MS, a motor pulled in Jackson, MS or just hunting, boating, or a fishing buddy, he could do and be it all. He was an accomplished debater. He was one of the few people that could go toe to toe with his older brother Jerry and had Jerry seeking help. His favorite events were the Family Reunions and hosting JSU vs. Valley Game Cookouts. Frying the fish, barbecuing, and feeding the family, that is where he prided himself on being a master chef. His Heritage He leaves to cherish his memories his devoted wife, Jessie Sue Jones Harvey, and two sons, Calvin McLin, of Pelahatchie, MS, Demetrius (Yamija) Hicks, Puckett, MS, grandchildren and great-grandchild, Tesha Hicks, Ashbriyanna Hicks, Demetria Wash, Shamiah Hicks, Sharlotte Hicks, Demetrius Hicks, Jr. Zykerria Hicks, Caison Brown, Olivia Ruffin; one (1) brother, namely: Kennis Harvey (Eddie Jean) of Chicago, Il; three (3) sisters: Ruthie (Robert) Johnson, of Hazelwood, MO, Janace H. (Joe) Goree, of Vaughan, MS and Shelrey A. (Charles) Turner, of Olive Branch, MS; cousins raised and loved as brothers Charles A. (Deloris) Harvey, Chicago, II, Frank R. (Lisa) Harvey, Chicago, IL and a host of loving nieces, nephews, cousins, and friends. Wayne was preceded in death by his loving father, David, and mother, Sallie Mae Lloyd Harvey, along with nine siblings, namely: Justine Crudup Judon, Sallie C. Hughes, Dora L. Kincaid, David P. Harvey, Bobby Joyce Harvey, Don Jeffery Harvey, Charles F. Harvey, Jerry R. Harvey, Almytris Solomon Fowler, and two unnamed babies.

Wayne Burgess Harvey, the fifteenth of 16 children, born to the late Sallie Mae Lloyd Harvey and David Harvey, born December 5, 1954, and was called home to be with the Lord January 26, 2021.... View Obituary & Service Information

The family of Mr. Wayne B. Harvey created this Life Tributes page to make it easy to share your memories.

Wayne Burgess Harvey, the fifteenth of 16 children, born to the...

Send flowers to the Harvey family.