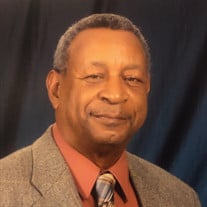 But they that wait upon the Lord shall renew their strength; they shall mount up with wings as eagles; they shall run, and not be weary; and they shall walk, and not faint. – Isaiah 40:31 At the age of seventy (70), Brother Willie Earl Myers transitioned from his earthly home and entered into peace on February 3, 2022. He was the second son born to Charles Ray Proctor and Beulah Myers on September 29, 1951 in Brandon, Mississippi. He confessed Christ at an early age under the leadership of Reverend E. L. Gardner at True Vine Missionary Baptist Church. He attended Carter High School and graduated in 1970. He also attended Jackson State University and served the United States Army and was honorably discharged after seven (7) years. Willie would often tell the story of how he met Thelma Maria Grant. He had found himself a wife and they married on September 21, 1974. To this union, Felicia was born. Also, a part of this union was Joseph and Shelia. Willie joined his wife’s home church, Mount Pleasant United Methodist Church in Pelahatchie, Mississippi. He was a faithful member that served as a lay leader, adult Sunday school teacher, trustee, deacon, and choir member. The name of the church has changed to Family Worship Center and he continued faithfully until his health failed. He was a hardworking man and had been employed at Cataphote and General Cable. He enlisted in the United States Army. After being discharged, he began working at BFI. He then worked as a truck driver at Tri State Brick. He retired from Tri State Trucking after many years of service. Brother Willie Myers was preceded in death by his father, Charles Ray Proctor, his brother, Charles Ray Proctor, his grandson, Damian Bilbro, his parents-in-law, Early and Braddie Grant and brothers-in-law, Albert Miller and William Tolston. He leaves to cherish his memories: his wife of forty-seven (47) years, Thelma Myers of Pelahatchie, Mississippi, his loving mother, Beulah Myers of Flowood, Mississippi, his daughters, Felicia Myers of Brandon, Mississippi and LaQuetta Bilbro of Jackson, Mississippi; his stepson, Joseph (Denise) Grant, Sr., of Pelahatchie, Mississippi and his stepdaughter, Shelia McKinnis of Florence, Mississippi. He also leaves twelve sisters and brothers: Bobbie Jean Miller, Janice Tolston, Curtis (Jennifer) Myers, James (Carolyn) Myers, Sr., Bob (Geneva) Myers, Ricky (Juanita) Myers, Michael (Connie Griffith), Roy (Renetta) Griffith, Jimmy (Cynthia) Myers, Laura Myers and John Myers; eleven grandchildren, ten great grandchildren, a host of nieces, nephews, cousins, and friends.

But they that wait upon the Lord shall renew their strength; they shall mount up with wings as eagles; they shall run, and not be weary; and they shall walk, and not faint. &#8211; Isaiah 40:31 At the age of seventy (70), Brother Willie Earl... View Obituary & Service Information

The family of Mr. Willie Earl Myers created this Life Tributes page to make it easy to share your memories.

But they that wait upon the Lord shall renew their strength;...

Send flowers to the Myers family.