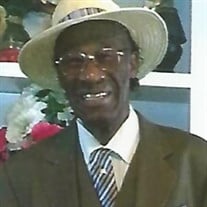 Bill was born in Yazoo City, MS to the late Willie Whitney and Catherine Roberts. He was affectionately called “W.D.”, “Bill”, and "Billy Willy”. He attended St. Francis Catholic Church and graduated from St. Francis High School in 1961. After graduation, he ventured off to the windy city of Chicago, IL. While in Chicago he worked at Montgomery Ward before transferring to California where he connected with his biological father. Bill later worked at Lucky Warehouse where he retired in 2001 after 32 years of dedication, hard work and making friends. While in CA, Bill met his beautiful wife Aslee and her family. Together they started a new union with their children and became one family as God intended. . Aslee introduced Bill to bowling. Afterward, together, they joined several leagues, completed for the big titles, and met many new friends. They also loved to watch the Golden State Warriors and rooting for their favorite team. Bill loved life, people and having fun. He was a Leo of course, and the life of the party. He loved telling a jokes and teaching others about cars, dressing sharp, basketball, cooking and fishing. He enjoyed spending time with his family and friends. Bill had the best years of his life in Byram, MS where he fished on his lake and shared had many wonderful moments with his fai and friends. Bill's legacy will live on through everyone he met. His love for God, family, fishing and cooking chicken wings will always be apart of such wonderful things. Bill always said, “Don't worry about the mule going blind, just sit in the saddle and hold the line." Bill leaves to cherish fond memories and adoration, a loving and devoted wife; Aslee Booker Roberts, daughters; Angelia (James) Freeman of American Canyon, CA, Sherann Bradley-Cormier of Danville, CA, brother; John Roberts of Yazoo City, MS, sister; Barbara White (Oliver) Preston of Oakland, CA, sons; Charles (Nonie) Johnson of Fairfield, CA, David Bell and Autjuan Roberts of Las Vegas, NV, sister-in-law; Mary Epps of Concord, CA, brother-in laws; Herman Booker and Eddie Booker. He also leaves a wonderful generation of 11 grandchildren and 3 great-grand children; one aunt, Pecola Roberts of Yazoo City, MS, nieces, nephews and cousins. His generosity will always be remembered by his neighborhood of extended family, including his lovely neighbors, James and Stacey, his god child Conner along with his mother Deanne.

The family of Mr. Willie Daniel Roberts created this Life Tributes page to make it easy to share your memories.

Bill was born in Yazoo City, MS to the late Willie Whitney and...

Send flowers to the Roberts family.